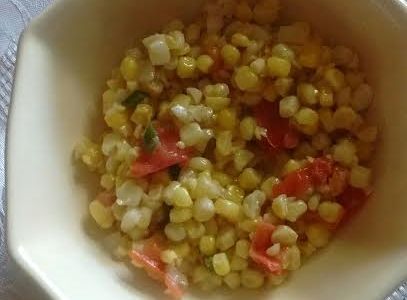 We recently purchased a bushel of corn from a local FFA group. After shucking and blanching, I froze half as corn on the cob and the other half I cut from the cob and froze the kernels in freezer bags in 2 cup quantities.

I’m not a big fan of just heating up corn and serving so I created a dish using some of our other garden vegetables and it turned out very delicious.

1. Saute onions and jalapeno in butter for a couple of minutes.
2. Add corn and milk. Cook until heated through, about 5 minutes.
3. Add chopped tomatoes and cook for about 2 minutes.

The milk adds moisture while cooking but gives the corn a nice flavor and a slight creaminess when mixed with the butter. I used only 1 jalapeno since John is not fond of too hot but I think I could have safely added another. The slightly cooked fresh from the garden tomatoes add a nice texture to the medley.

Is there anything better than vegetables fresh from your garden?

My husband grew up on a dairy farm.  The stories he’s told me about his experiences are more like the 1800’s rather than my experiences of growing up in the 60’s. His younger years were in a home that did not have electricity or running water. They would haul water in buckets from their water well. His father worked and lived during the week in town over two hours away to help support the family while his mother stayed at the farm raising 6 girls and 1 mischievous boy. She didn’t put up with a lot of nonsense from her youngest son but she was a very loving mother. Her days consisted of cooking four meals. Yes, four: breakfast, lunch, a light supper and dinner.  After the children were in bed she would be sewing school clothes out of flour sacks. They had no telephone or television. They also grew all of their food in a large garden. After the dairy was sold, they raised thousands of rabbits which were sold to the U.S government.

Their nearest neighbor was about 3 miles away and she didn’t drive. Circumstances demanded she be strict and tough. She didn’t do all of this single handed, the children worked on the farm!  To her honor and credit all of her children stayed out of trouble and grew up to be responsible adults.

Before I knew my husband, Dessie cared for his invalid father at home until his death, where many would’ve placed him in a nursing home.  Even though she had a very difficult life she was not a bitter woman.

I knew Dessie in her elder years. She lived in a mobile home next to one of her daughters in the country. Once or twice a year she would visit my husband and I for about a week. Most daughter-in-laws might cringe at having their mother-in-law stay in their home for a week. This was never the case for me. She didn’t have to be entertained nor did she demand special accomadations. She became part of the household and would help with dishes, laundry or whatever chores we had to do. One year she noticed wild plums were on the trees ready to be picked and we were soon canning wild plum jelly. During the day she would lay down and take a short nap. I would guess at this time in her life she was in her late 70’s. As she aged she could no longer make the 3 hour trip and I really missed those visits. She had such a sweetness of spirit to her that it was hard to imagine the tough no-nonsense Mother he had growing up.

Dessie has been my role model for the perfect mother-in-law. She was helpful, flexible, not seeking her own way and she did not offer opinions on what her adult children should be doing with their lives (unless asked). I can’t say I have always followed in her footsteps perfectly but so thankful she created a path for me to follow. 1 Corinthians 13: 4-7 perfectly describes Dessie and what I hope to attain:

“Love is patient, love is kind. It does not envy, it does not boast, it is not proud. It is not rude, it is not self-seeking, it is not easily angered, it keeps no records of wrongs. Love does not delight in evil but rejoices with the truth. It always protects, always trusts, always hopes, always perseveres.”